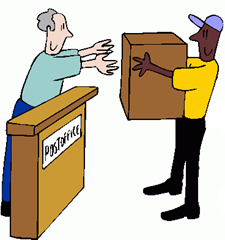 Every time the magazine goes to the press for printing, I anxiously keep waiting for its arrival. And when the printer calls and says that the magazine is on the way, I keep guessing how well it would have been printed. And when the magazine finally arrives, there is always mixed emotions – one of joy seeing it printed coupled with one of a little disappointment at the quality. And the disappointment keeps growing as I keep spotting errors one here and one there!

Then begins the work of sending all the printed copies to the subscribers and promotional offices – the task of dispatch. Every issue of The CALL is sent to different states in India and various countries around the world. We post the overseas copies from Dalmianagar Post Office. It is a computerised post office and the only post office in our surrounding where the Postmaster and the staff cooperate and work properly during the work hours!

On the 10th of this month I took all the parcels that had to be posted to foreign countries to the post office. Then began the ordeal of searching of options to send the parcel. Finally the option was found where I had to give my inputs too! One after the other the parcels were kept on the electronic weighing machine and the details were entered and the parcel was kept aside.

There was one parcel for Dublin (and a few individual copies to be sent to the same place). The staff searched the list and could not find the place. So I had to come for her rescue. I asked her to search for ‘Ireland’ and there it was! The details were entered and it was kept aside. There were three parcels for London and in the address the country was written as UK. The long search was becoming a vain effort. I asked her to search for ‘United Kingdom’ and very soon as though the place was found, the staff started to enter the address details. Only then did I notice that she had selected UKRAINE! So my parcel was being sent to UKraine instead of UK!! (Not sure how many other such posts sent earlier to the UK landed up in Ukraine!)

I stopped the staff from entering the details mentioning that it was not the meant country. I was in a deep thought…….thanks to Dr. Jeevan Kuruvilla’s (Nav Jeevan Hospital, Daltanganj) blog that I read a few months back, in which he had mentioned the same issue that he had faced in a post office. I remembered what he figured out – it was not UK or London, but Great Britain!

I could only recollect the lines that I wrote in one of The CALL’s blog in March 2011 on the making of the first cover images of The CALL:

Though it was tiresome, we tried together as a team

Though it was tough, we were through with His touch

Though it was testing, we knew that we were trailing in the tracks of tested testimonies

Though we were tensed at times, we weren’t troubled as we were trusting in a Truthful God

Though it was time-taking, we didn’t consider it to be trivial, because we were together in a task that will trumpet the Truth

2012 Promise wallpaper with a CALL 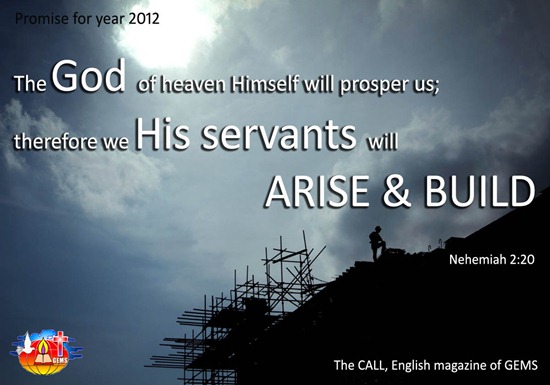