The Awake & Arise Issue of The CALL 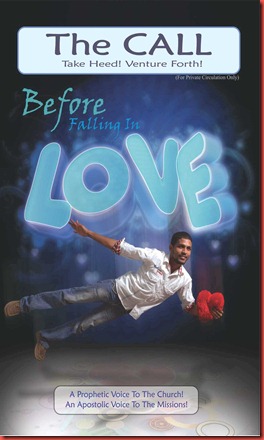 Just before leaving to Bihar after the vacations I visited a Juvenile Home in my hometown in the South and spoke with the 23 inmates who were of 10 to 17 years of age, arrested for various crimes. There was this one boy in the Home who was just 12 years old. He hailed from Bihar and as soon as he heard that I was going back to Bihar he held my hands and cried pleading me to help find his parents. When I conversed with him I came to know that he ran away from his home because his parents and elder brother fought very often. Dysfunctional families are growing and uncared children and teens go wayward. Deprived of love they long and search for it from others and get trapped in an imaginary and unreal world, not knowing the difference between “love”, “infatuation” and “lust”.

The insightful article “Before Falling In Love” is a response to the cries of such teens and youngsters who have strode that pitiful path and ended up tarnishing their teenage and youth. Realizing that it is also the responsibility of the parents to properly parent their children, the article on Parenting in the ‘Get Equipped’ column focuses on helping parents to know how their children act at different stages of life and equips them to be God ordained parents in the lives of their children.

The Children’s Chronicles column also brings the story of a failing and abused boy who needed help. While the story “Make a Difference” portrays how a friend of this boy made a difference in his life for the better, ‘MK Memoirs’ carries the true story of a GEMS MK who shares his very personal story with us and I am very sure it will inspire every MK and every youth to live for God no matter what deprivation or struggle one goes through. It’s also an example of how God can take one from the crossroad to conviction and to follow in the footsteps of his parents and forerunners, who chose to sacrifice and to give up all that they had, to be a God’s Missionary!

The Seventeenth SAARC summit was held under the theme “Building Bridges” and this leaves us with the responsibility to take certain concrete steps to build bridges to reach out to the SAARC nations with the love of Christ and the featured article in FBWL proposes this answering to the question “Who is my neighbour?” Reminding every Christian at the workplace that the ACT of sharing the gospel is for all, the article in ‘Tentmaking’ prescribes with the gears to gear up for workplace evangelism.

While the silver screen and the big screen has coupled up once again (big stunt to rise TRPs though) as in the case of Satyameva Jayate, the TV talk show on social issues, the producer and host Aamir Khan however real and convincing he might be seen on the show, he fails to realize that “life speaks louder than shows”. Apart from divorcing his first wife, the child born to Aamir Khan and his second wife Kiran Rao was through “Surrogacy” and the article “Rent-A-Womb” explores and exposes the realities behind this issue and creates a credible Christian perspective to the whole issue.

Whilst we live in a time when evil is packed and presented appealingly, Christians and Christian ministers are failing to live up to the standard of the Bible, pleasing to God. We hope that through The CALL we will continue to “awake” and “arise” the readers! (Ephesians 5:14 ESV).

Dear Subscribers, this issue of The CALL will be in your mailboxes within a fortnight. If you do not receive The CALL and would like to subscribe click The CALL Subscription. 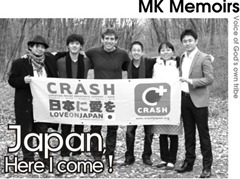 Hope you all enjoyed reading and were inspired by the story ‘Japan, Here I come!’ in the last issue of The CALL. This article was published in the MK Memoirs column of The CALL, a column written by MKs for MKs. To know more about this column and to contribute visit A call to ALL God’s own tribe.

‘Japan, Here I come!’ is an inspiring story from the life of Silas, the son of Missionary parents who left the United States, their homeland to serve the Lord in Japan. Silas went on a World Mission Tour visiting and serving in 11 countries in 11 months through the Adventure in Missions program of World Race in the year 2011. As part of this tour he led a team to GEMS. Just before he left Bihar, in a conversation that we had, did I come to know that he is a MK who always had a heart for Japan and wished to go back there.

This January I was teaching Leadership lessons to the students at our GEMS Timothy Bible College, from the life of missionary Hudson Taylor.

As I was preparing the lessons, I noticed one interesting fact from the life of Hudson Taylor's wife. His wife Maria Dyer was born to English parents who served as missionaries in China who died when she was a very young child. So after their death she was sent back to England. But in her later teens she returned back to China saying that it is her home and served there as a school teacher and then married Hudson Taylor.

When I was reading this I remembered Silas - how he too carries the same vision and burden as his parents, for Japan. I sent him a mail requesting him to do a write up on these lines and thus was born ‘Japan, Here I come!’

The CALL thanks Silas for writing this inspiring story from his life and we pray that this would inspire MKs like him.

And even as I write this I am also reminded of that which Bro. D. Augustine Jebakumar penned in the report of the recently held GEMS AGM, reporting on the MK Department of GEMS,

“Having a unique blend of languages and cultures in them the Missionary Kids are indeed God’s own tribe!……. Gone are the times when MKs never wanted to follow in the footsteps of their parents. It is so amazing now to see our Missionary Kids join our ministries here in the North……. The multifaceted ministries of GEMS provides opportunities for MKs to bring in their gifting and areas of expertise into missions.”

This is not the end! In the next issue of The CALL, the MK Memoirs column carries a true story of an Indian, a very GEMS MK’s life story.

Look forward to be inspired!

If you are a MK or even otherwise you wish to read this article send your complete postal address to thecall@gemsbihar.org and we will send you this issue as a complimentary.
Technorati Tags: Missionary Kids
Posted by The CALL at 8:15 PM No comments: 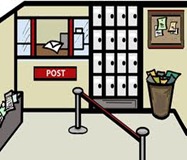 If you are a regular reader of this blog you might remember reading the post Delivery Drama at Dalmianagar in which I had written about the difficulty that we faced in posting the parcels to destinations abroad.

When it appears that you have known-it-all or all-troubles-have-ended, only then you are faced with new ones. And you realize that you need more of God’s grace and God given wisdom. This post is all about this – yet another experience to learn to be dependant on God for all things, old and new!

Being confident that I had written all the addresses well (Great Britain and not UK!), I sent Brother Selva, Brother David and Brother Kingston to the Post Office, as I was occupied with some work. After a while (when I assumed all parcels would have been posted) came a call saying that the clerk at the Post Office was not sending the parcels for lack of a FORM! “Here comes another hurdle”, I thought to myself and was wondering at what that form was. Immediately I plunged into a frenzy search in the India Post website, all the while PRAYING. Within a few searches, navigating around the website, I landed up in a page which had several documents, one which was 726 pages long!

And I frenziedly started reading it too – the guidelines for countries where I was sending the magazines. Realizing that it is going to end nowhere, not at least in that short time, I searched once again in the site and I found two forms ‘Customs Declaration CN 22’ and ‘Customs Declaration CN 23’. Going through them in a hectic manner and finding them appropriate, I printed them and rushed to the Post Office with Brother Peter in his bike, only to face the much reluctant clerks and officials at the Post Office. A lot of persuasion (showing the printouts and explaining to the postal officials) and much of prayers was required to convince them and to send the parcels. Finally, through the persuasion I figured it out that CN 22 was the right form! Then began the long ordeal of photocopying the forms, filling them and fixing them along with all the parcels. It was ONLY by the grace of God that the parcels were sent that day. 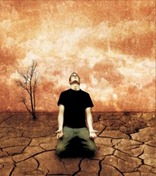 It was an impossible situation – a new hurdle, less or no cooperation, reluctant staff, less time. But the promise was afresh like never before, “With Your help I can advance against a troop; with my God I can scale a wall.” (Psalms 18:29 NIV) When we rely on God’s help every impossible thing becomes possible and especially if it is meant to build His kingdom and for His glory! This is also yet another proof to the fact that missions are were all adventures lie – different in nature though, given the field! A place to experience God’s promises, provisions, guidance, grace and power so intimately!

Why did I remember this incident after so many days?? As I returned to office this morning after vacation, one of the magazine parcels that I had sent to Australia that day returned today after 64 days, with the Custom Declaration Form CN 22 intact! If you are sending a parcel to a foreign destination from India remember to visit this site and download the necessary forms/documents - http://www.indiapost.gov.in/Customs_Information.aspx

Above all seek God’s help and seek to glorify Him alone!