Science & Tech Special of The CALL 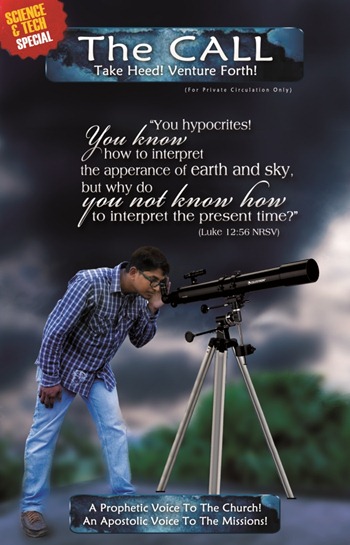 If I say “Science has made living easy”, it won’t sound exaggerating; as the modern advancements of Science & Technology has made communication quicker, transportation faster and living cozier. But as C.S. Lewis rightly says, “Science works by experiments. It watches how things behave. Every scientific statement in the long run, however complicated it looks, really means something like, 'I pointed the telescope to such and such a part of the sky at 2:20 a.m. on January 15th and saw so-and-so.’”. He also notes in the book ‘The Magician’s Twin’ that it is a misguided effort to apply science to areas outside its proper bounds.

It is even more alarming to see the moral decline in those committed to Scientific & Technological advancements. Take for instance the Ranbaxy Drug Scandal of “selling adulterated drugs with intent to defraud, failing to report that its drugs didn't meet specifications, and making intentionally false statements to the government”*; found guilty, Ranbaxy has agreed to pay $500 million in fines as the 9-year long investigation came to an end this May 13th. Ranbaxy also "acknowledged that it failed to conduct proper safety and quality tests of several drugs manufactured at the Indian plants, including generic versions of many common medicines, like gabapentin, which treats epilepsy and nerve pain, and the antibiotic ciprofloxacin."+ The article “The Pharmaceutical Industry–Saving lives or Saving dollars?” pitches on this issue answering moral and ethical questions.

This issue of The CALL is focused on Science & Technology and tries to answer a few major concerns. The article “Is Stem cells research a ray of hope? A biblical perspective!”, is an expert writing presenting the Biblical case for and against Stem cells research.

Advancements in Information & Technology have shrunk the world and have made all information available on our finger tips. Advantageous though, IT industry has also caused for increased immorality. “Blessing or Curse – Just a click Away!” warns the reader on the pitfalls and addresses various issues in the perspective of career and consumerism.

“Life lessons from Chemistry” are snippets of thoughts that will take you to the lab to learn life lessons from Water, Sodium & more. There is a treat for children too in “Up, Up & Up” where you will read the dream of a boy and his pursuit of Astronomy!

When we live in such a time where selfishness is considered supreme and where money matters more than moral values, it is necessary for every Christian to be a messenger of God at the workplace as the article “Missionary in the Marketplace” in the Tentmaking column suggests. The lead article “The Love of the World” sums it all up beautifully – “the intoxication of wealth & the magic of the world will aspire to draw us into its vortex”. Let us be vigilant “to know how to discern and interpret and apply the proof to this present time” and “judge what is just and personally decide what is right” (Luke 12:56,57 AMP).

Stay tuned with The CALL, as more articles on Science & Technology with issues addressing Ornithology, Food Industry & more are to be published in yet another release very soon.