The Teens & Youth Special of The CALL 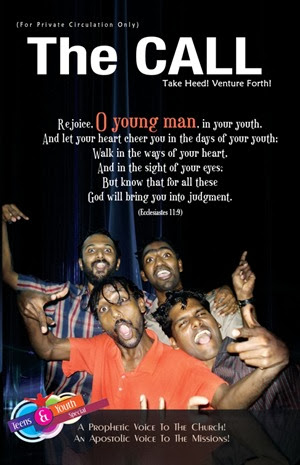 Travelling in a train from Patna recently, I happened to hear the conversation of two young girls, studying Law in a College in Patna. I was shocked to hear one of the girls publically use cuss words to express her anger over another college mate. We could see young people not being shameful of such profanity in the public space. Facebook, Twitter, Tumblr and all such Social Media are flooded with such expressions. And we cannot blame the media alone for the deterioration of values in the lives of young people; equally are responsible the parents and caretakers and elders.

The mother of C.S. Lewis was a very devout Christian who made efforts to influence his beliefs; because she died in his early youth, her influence waned and Lewis was subject to the musings and mutterings of his friends who were decidedly agnostic & atheistic. And only in later years that he first came to a belief in God.

But many a times even our presence is seemingly an absence as we fail to make any difference. It is high time that we don’t just brush these issues under the carpet or just set high standards for our teens and fail to live by them in our lives.

This issue of The CALL addresses such issues of the teens & youths and brings in a Biblical perspective. “I am Young”, “Boundary Conflicts” and “Sexual Addiction” are well researched articles that practically and Biblically treat the issues of teens and youths.

We also have a few of our leaders who openly share theirs & their friends’ struggles of teen/youth days in the writings “My Struggles...”, “Love Letter” and “I Quit” and the young readers will not only be able to relate with them, they will also learn the way out.

The story in the MK Memoirs column is compelling evidence on the effect of the role of mentors in the life of a Missionary Kid as a teen/youth. Having said that, I remember a line from the Christian movie “Courageous” that features the story of five families – “to break the chain of destructive patterns in my family’s history”. Let us identify such destructive patterns in our family’s history and also help the teens & youths in our care & proximity to identify them and break them in Jesus’ name and restore the “principles of the fear of God” in our lives as the lead article suggests.

It is our prayer that this issue of The CALL would not just be an educative material but that it would bring about real transformation in the lives of the readers and would add Biblical values to their life.