The ‘Social Issues Special’ of The CALL will be available to the subscribers within a fortnight. 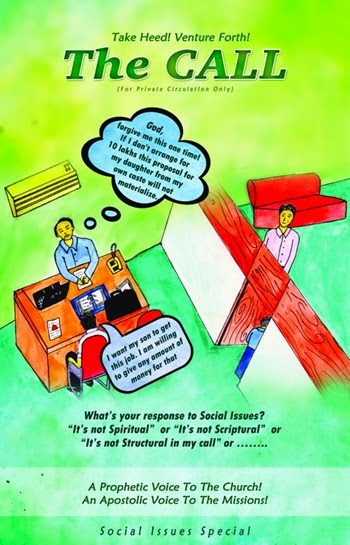 While this issue of The CALL was getting ready, it was alarming to know that the founder of the world’s largest Pentecostal church, David Yonggi Cho was sentenced to three years in prison and fined nearly 5 million dollars for embezzling church funds and for tax evasion. When the whole of Christendom is being swayed by Prosperity Preaching, this is for sure a wakeup call. This is not just a case of misappropriation of funds, but misinterpretation of Scriptures and not just evasion of tax, but of truth & social responsibility. “Poverty: Is Prosperity Preaching the Answer?” is an attempt to answer the moral & social perspectives of this issue.

This issue of The CALL addresses a few such Social Issues and tries to present the prospects in Biblical perspectives. The early church was so much socially concerned that when Agabus predicted by the Spirit of God that a severe famine was about to come over the whole inhabited world, the believers at Antioch sent financial aid to those living in Judea. (Acts 11:28-30). The unselfish, socially minded and acted believers were the ones who for the first time were called as “Christians”. Even these days “predictions by prophets” are widely heard, alas, those are only used to fill their own pockets with offerings.

Social responsibility is just not only about something to be done to someone afar off; it is a call to “change” that needs to start from every individual and families. What else is better to live that change than in a Wedding that suffers so many social evils like Dowry, Casteism, etc. “Grand, Gaudy or Godly Indian Wedding?” dwells on it.

Change is not alone an individual obligation, but institutional too. Taking on this position, “Church: Answer or Accessory to Casteism or Racism?” looks at this crucial matter in the light of biblical principles & historical practices. Gender bias is another such discrimination that has led forth to the recent campaign “Ban Bossy” and the article ““Ban Bossy” – Can it Cure Sexism, a Social Disease” analyzes this campaign critically and biblically.

When India is preparing to elect its next Government and as political parties try to cash on casteism and fanaticism and woo the voters by their manifestos and speeches, the lead article “Manifesto of Compromise” rightly points out and warns of such spirit of compromises in the Christian world too. Addressing one such compromise is the article, “Eradicating Bribery & Corruption: Will the Church Bell the Cat?”; which provokes point blank & honest responses.

2014 marks the anniversaries of several massacres and genocides that I would rather call it an ‘Anniversary of Annihilation’; 70 years have passed by since the Holocaust ended, 40th year of Khmer Rouge’s ‘Killing Fields’ that massacred Cambodians, 25 years since the Tiananmen Square Massacre, 20th year of Rwandan Genocide, 5th year of Sri Lankan Genocide. Revenge is never the solution but Reconciliation is! “Kindness is a Boomerang” is not only an article for children but is the value that needs to be lived which propels us to ACT and not evade saying, “it’s not Spiritual” or “it’s not Scriptural” or “it’s not Structural in my call” as “Called Unto Action” points.