Wished to breathe my last in the Ground…

"My dad was a football player and was very much interested in watching matches; during my school days he would take me along with him to watch matches and that’s how I started following football. The discipline and the huge following attracted me to this game and I wanted to become a player and started playing football at the age of 8... Once I got the opportunity to play in the same team with the previous Indian National Football team Captain Baichung Bhutia, when he had come to Ooty for a national game and was invited by Hebron for a friendly match. The other time was when I played with the earlier Captain Vijayan...

Another footballer whose personal life and dedication that inspired me was missionary Graham Staines. He was one of the Council Members of the Hebron School and his sons Philip and Timothy and daughter Esther studied here. I played with him in the same team many times when he would visit the School. We played together for the Staff-Parent team against the Students team and he was such an encouragement on the ground and would cheer up even we lose. It was a shock to me and the entire School when we heard of the brutal act when Philip and Timothy who had gone on holiday were burnt alive with their father Graham. His life as a missionary has always been a challenge and an inspiration to me... " shares Immanuel Jayakumar in this article in The CALL. 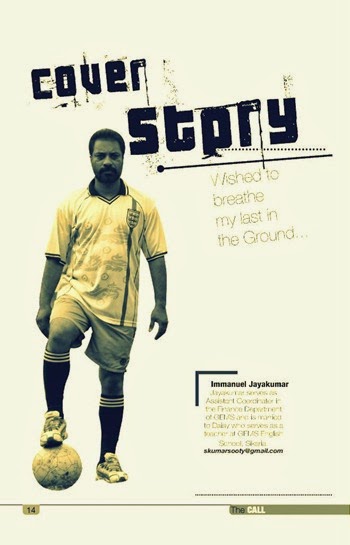