Afflictions Special of The CALL 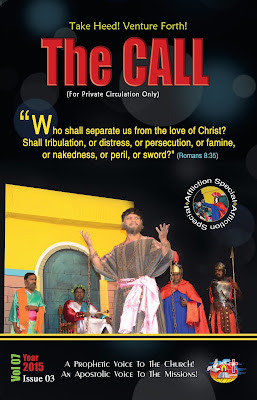 The day before the surgery at CMC lying on the bed I was processing in my mind the words of the surgeons, “there are chances of losing or change of voice”. Though been on the surgeon’s table thrice before, there was no doubt, no fear in my heart but only the assuring presence of God and these words kept resonating within me, “we know that all things work together for good to those who love God, to those who are the called according to His purpose.”

Afflictions can deter & weary us, if not for the promises, purposes & presence of God. It can turn one’s attitude & actions for the worst or to appreciate the preciousness of life and the divine precepts to preserve & practice sacredness in every area of life. In these pages of the ‘Afflictions Special’ of The CALL you will encounter the lives of people who have suffered loss, gone through physical & mental pain; as one of the poem in this issue says you will “not only read the joys, but also the tears; not only success, but also sufferings”.

Kahlil Gibran said, “Out of suffering have emerged the strongest souls; the most massive characters are seared with scars.” ‘First Seed’ is the narration of a missionary couple on the loss they suffered and culminates with how God used their testimony to help a family, suffering a similar loss, to reconcile with Him. ‘In His Call’ narrates the incidents in the life of a couple from Jaffna of how they found peace & purpose in Jesus Christ. ‘Afflicted, not Abandoned’ is another story of a couple, in the Tentmaking column, that defines how affliction brings new meaning to career & success.

Hearing Theodore’s story I wanted it to be published in this issue. When I approached him it wasn’t easy on him to recollect the past, the details of the accident and the aftermath. As he narrates his story in ‘There is more to this Form’ in the MK Memoirs, I believe this will not only challenge the MKs but also everyone who is in the same path of physical pain. It is possible to ignore the afflictions of small children, but deeply rooted unhealed scars can affect their character & personality. ‘Be My Friend’ in the Children’s Chronicles is a cartoon story of a small girl who is desperate to make friends.

Director’s Desk aptly calls afflictions as the ‘Gifted Hour of Trial’ and brings seven keys to face the same. ‘In their Shoes’, the Get Equipped article soundly addresses the needed subject of ‘Counseling the Afflicted’. In this year alone GEMS has witnessed major persecutions in eight fields; some are recounted here and the News & Views article practically shows the way in ‘Facing & Handling Persecutions’.

Times of crisis also bring the best from worst situations, like the hashtag #portesouvertes (“open doors”) used by Parisians who offered shelter to those afraid to travel home after the terrorist attacks; and the way in which strangers came together and helped each other during the Chennai Rains. “Is your dependence merely on knowledge and experience or do you seek the wisdom from above?” is the pondering question from the lead article ‘In Crisis’ which goes on to show how a spiritual leader will handle crisis.

The image on the cover is from a skit of the ‘Make in India (for all seasons)’ Convention echoing the words of Paul that nothing can separate us from the love of Christ. The image of the ultimate expression of God’s love is the suffering of Christ on the cross demonstrating through our sufferings that ‘He has been there before and is with us’; that people are not alone to deal with their dukha or karma or mueana but He is able to sympathize with our weaknesses (Heb 4:15), because He himself was tested & suffered (Heb 2:18).

Let me close with the closing lines of a poem in this issue, “Every time the situation didn’t change; rather it changed my attitude towards God and His ways!”

(Click to read the online version of this issue - Afflictions Special)
Posted by The CALL at 1:03 PM No comments:

"For our understanding I have phrased the term “Art” as “Developing and applying God given talents, skills and gifts in the best way or manner for His glory.”... God in His Sovereign wisdom uses all the five terms together in Exodus 31:1-5, Wisdom (“Chokmah” in Hebrew), Understanding (“Tebunah”), knowledge (“Daath”), all manner of workmanship (Skill) and Spirit of God (Gifts) which is the first among all. The Lord’s expectation was to make Bezalel as an “expert” (MSG) because he needs to devise everything skilfully. The expectation on a believer is the same and even much more in this New Testament Church (Ephesians 4: 7-13, MSG). 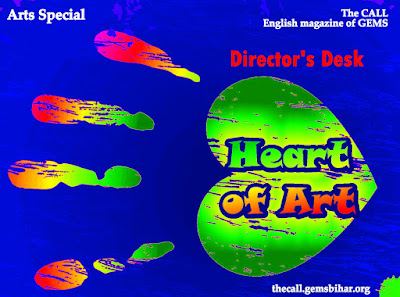 In this article I bring biblical perspectives to the art of mentoring, giving, preaching, witnessing, leading and administering." writes Dr. Ashok Kumar (Director of Missions, GEMS) in this article in The CALL.

This article is part of the 'Arts Special' issue of The CALL. Click to read an intro of this issue - http://thecall.gemsbihar.org/2015/08/arts-special-of-call.html

To receive The CALL click http://thecall.gemsbihar.org/p/subscription.html
Posted by The CALL at 12:49 PM No comments: