Media Special of The CALL

This issue of The CALL magazine, the Media Special is released and will be available in print shortly. 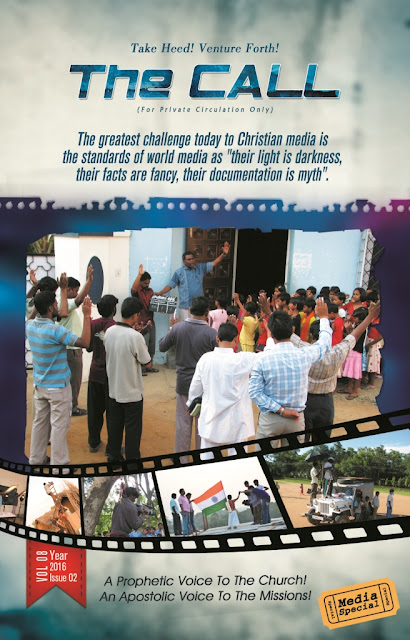 A young boy was brought to be counseled. Surprisingly, he not only knew and accepted Christ solely through the Internet (he is from a place that is hostile to the gospel); he had also grown much in the knowledge of the Bible. But the sad thing was internet had taught him a very wrong eschatology.

The greatest challenge today to Christian media is the standards of world media as (in the words of Malcolm Muggeridge) “their light is darkness, their facts are fancy, their documentation is myth”. This Media Special issue of The CALL is an attempt to bring a biblical perspective to media and in this issue you will read articles on social and digital media, broadcast media and print media.

Majority of this world’s population is now identified as either digital migrants or the digital natives. ‘Facebook Vs Face the Book’ throws light on this issue and gives a balanced biblical view to use and to conquer social media for Christ.

Christianity has a long and rich tradition of music from the Bible and history, but sadly a lot of Christian music has become a “performance or entertainment” rather than a message with all the attention on the musician or the music. The News & Views article ‘Biblical Perspective to Christian Music’ not only deals with this issue but the author shares his own testimony of how he left the cinema music industry and became a missionary. Likewise the Red Hot column carries an interview with Brother Raju a song writer & Worship leader, who answers honestly questions on the deplorability of Worship being used as a platform for personal fame.

Cyber bullying and facebook depression are on the rise and quiet often children get abused online by strangers. Recently Godfruits ran an article on how three teens died in mysterious ways and the investigation led to an App that they downloaded; which allows users to stay anonymous with features of instant messaging and sending pictures & videos. These children participated in a challenge through this app which led them to their death. This is the danger when the virtual meets the real. The article for youths, ‘Web-O-Sphere’ warns on the dangers of indulgence in social media and lays the rules & checklist to safeguard oneself from becoming prey and polluted.

In MK Memoirs column article ‘From Missionary Family to Mass Media’, a missionary’s daughter shares how God’s providence took her to the Mass Media and on the need for Christians to be there to change the trend of news & programs for viewership to present truth.

Born as digital natives, this generation of children are not only comfortable with gadgets but crave & cling to them. ‘Danny and his Xbox’ in the Children’s Chronicles column narrates the story of a boy whose gaming becomes an addiction to the point of giving him nightmares. While this warns children on the effects of gaming addiction, the Standing @ the GAP column article ‘Clean as Comics and Cartoons?’ raises the mounting concern over the contents of seemingly harmless animation movies, comic books and character depictions and sounds the trumpet for parents and elders to watch out for the content children are exposed to.

In the Movie Review of ‘Life of Pi’ Dr Vishal Mangalwadi presents the postmodern challenge where “truth” has been reduced to “story” and how it no longer matters which story is true, but only what one chooses to believe; and its effect on the presentation of the Gospel.

The Tentmaking column carries a PROFITeer’s testimony, ‘Creativity for the Creator’, of how one’s creative talent when correctly identified and nurtured can be greatly used for God’s glory and His purposes.  The Magnifying Glass column chronicles the origin and developments of GEMS Media Ministries.

“The danger comes” says the General Secretary Brother Augustine Jebakumar, “when man lacks discernment about two important aspects: the source of the message and the intention behind it.” Feeding and fueling narcissism are the various forms of social media. And scientists have found a new unit to measure narcissism, N=S/h, Selfie per hour! This generation has moved from ‘I think, therefore I am’ to ‘I shop, therefore I am’ to now ‘I pose (& post), therefore I am’!

In his book ‘Christ and the Media’ Muggeridge nails it when he says, “The problem of the media is but a symptom of a deeper problem – the problem of the human heart, alienated from God.” One of the greatest challenges is for this Selfie Generation to find the value of their true self in the Saviour, “who, though he was in the form of God... emptied himself, taking the form of a slave… And being found in human form, he humbled himself” (Philippians 2:6-8).

Mariyosh Joseph
Chief Editor
Posted by The CALL at 11:14 PM